In Fall 2020, I got an old broken CRT monitor from my college's recycling cage and turned it into a helmet with a working RGB LED display. Here's some information about how I made it and how it works. If you want to make a TV head without the electronics, this method should still work if you ignore all the electronic parts. If you just want to see the finished costume, skip to the gallery.

I disassembled the CRT monitor, being careful to discharge the cathode to avoid a painful electric shock. (I think my monitor was self-discharging anyway, but it's a good idea to be sure.) I put the big glass cathode ray tube away in a cardboard box so I wouldn't accidentally trip over it and make it implode, which would be unpleasant for multiple reasons. I cleaned out the inside of the monitor and shook out the dead ladybugs that had collected inside over the years. I eventually used a dremel to cut a hole in the bottom of the monitor just big enough to fit my head through.

My first prototype used plexiglass for the screen, but I found that a thinner sheet of polycarbonate was much lighter on my neck and flexible enough to bend into a convex shape, which makes the helmet look more realistic. I tinted the polycarbonate using some privacy window film.

The most difficult and frustrating part of this project was getting the helmet to fit comfortably using upholstery foam. Other guides on the internet show that they just use three blocks of foam cut into rectangles that you cram your head between, but that was unacceptable for me. I eventually figured out a good foam setup that leaves my ears uncovered, which is nice because it lets me hear and wear my glasses.

I hot glued everything together. I eventually added posable telescopic antennae extracted from an old TV antenna from a thrift store.

The screen is made of 300 individually-addressable RGB LEDs, specifically WS2812Bs. I made the LED matrix from a single 5-meter, 60 LEDs/meter strip by cutting it into 15 strips of 20 pixels each and soldering them together. People often ask me how I can see through the helmet; the answer is that I designed the matrix to have empty space between the strips:

It's like wearing sunglasses and slotted shades at the same time, so visibility is pretty good in a well-lit area, but bad enough in the dark that I need someone to hold my hand when I walk down unlit streets on Halloween night.

A Circuit Playground Express microcontroller (similar to an Arduino) controls the lights using a program I wrote. A mini PS/2 keyboard connects to the microcontroller through an adapter for an input method. This lets me control the lights. Just a few buttons would suffice for playing animations, but I opted for a full keyboard so I can type words to appear on the screen. The microcontroller has a built-in accelerometer which I use for a few gravity-sensitive animations.

Here's a circuit diagram of the whole thing.

In 2021, I collaborated with my friend Ellie to make them a TV head like mine, but better! The improvements were largely motivated by an added goal: Ellie wanted to display Chinese text on the screen. Chinese glyphs are more complicated than ASCII so we needed a resolution at least as big as mine despite the screen being smaller than mine.

The issue was that you can only make LED strips so dense before you need to make them wider, too. 60 LEDs/meter seems to be the densest you can go without sacrificing strip narrowness. We cleverly worked around this by laying the strips diagonally across the screen rather than laterally! This resulted in a tighter grid of 24x18 resolution. We also used extra-narrow LED strips, which gives Ellie more room to see between them, at the cost of more light reflecting back into their face instead of getting blocked by the margins of the strips.

This video shows the front panel detached, so you can see how the strips are arranged. Here's a photo of the back of the panel if you want to see the wiring.

The requirement of Chinese text also motivated a better input method. You can type Chinese on an English keyboard if you have a GUI, but it's hard without one. So, we used a Circuit Playground Bluefruit to control the helmet wirelessly from a phone, which is way easier than using a keyboard.

Here are some lessons I learned and tips to anyone who might want to try making one of these.

If you're trying to make your own TV head, feel free to ask me for advice! Send me a message on Discord (vivian#9409) or Mastodon or Twitter, or email me at [my first name]@[this domain]. If you don't need my advice, contact me anyway when you finish your TV head so you can show it to me!

Thanks to Franci Bolden for helping me with the dremel and bandsaw, and for insightful advice that I wouldn't have thought of! Also thanks to fuchsia and Izzy Swart for early hardware advice! 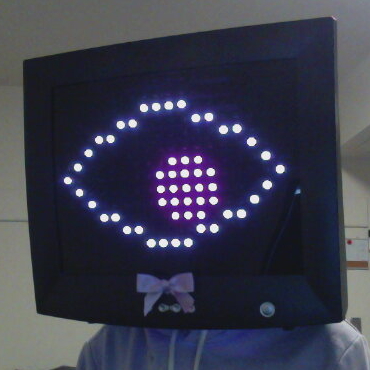 Here's a video demonstrating the animations. The lights look small in this video because I had the brightness turned down.

Here's a promotional video of us made by Marietta College video producer Mary Roberts.

Also check out this gallery of TV heads others have made using this writeup!